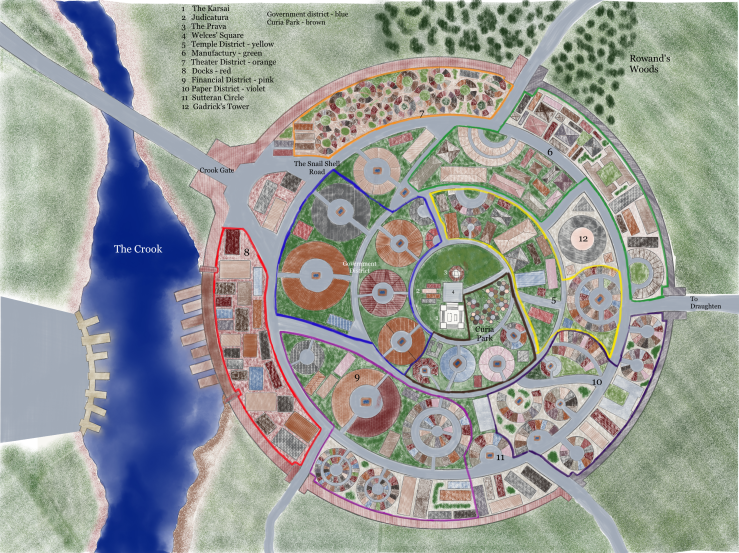 A long, long time ago…

No, I am not channeling my inner Al Yankovic, although The Saga Begins has supplanted American Pie as my ear-worm for that tune. No, this is the origin story of Rien’s Rebellion.

I elevator pitch it as “The Westerosi West Wing.” But it’s also a superhero story, where the superheroes are the civil servants who believe in good government enough to make it happen. I would read the hell out of a series where Captain America and Wonder Woman and King T’Challa and Daredevil and She-Hulk (and the rest of the in-universe lawyers — and please, please, please will Ta-Nehisi Coates, Ahmed Saladin & Nnedi Okorafor please write it??) were tasked with making government work from the ground up and the inside out. I think tax policy and judicial theory are just as important as armor and arrows, and I’d much rather write about justice and the rule of law than honor and the code duello. Honor is for gangsters. The Law is for everyone. And that’s why I’m giving away Book One. Because I want to share the hope I have in the world we make.

Rebellion began about two weeks after September 11. Spouse and I bought our first house together in the summer of 2001; we moved in on August 9. Though the United States had been experiencing some collective mental health issues for more than a couple years, we really lost it after 9/11. So there I was, in a new house, recently unemployed (I’d been working for a company that did airline service manual documentation and that didn’t last), in no shape to be a therapist, highly conflicted about the Afghan invasion, in which the father of my then 3 month old nephew was deployed. I’d written four trunk novels. They’re bad. They have some maybe interesting ideas that I’ll get back to eventually, but their primary purpose was mostly learning the craft and discipline of tapping a keyboard for extended periods of time and getting a story to move. I could feel myself spiraling towards depression and anxiety, but we had three cats and we hadn’t been together long, and I needed to pull myself out. So I dove into writing and didn’t surface except for food, sleep (and not much of it), exercise, and sex.

The trauma of the broken 2000 election, then the corruption of the first year of Bush-Cheney, then 9/11 and anthrax and free-speech zones and watching some of my own colleagues get brutalized for speaking out against creeping authoritarianism… When I came up for air in January of 2002, I had a first draft that didn’t suck. (It did, but it didn’t suck so much it should be burnt, and it sucked a lot less than my trunk novels.)

Now 17 years later, Rien’s Rebellion has gone through heavy revision. Rien was originally a plucky 16 year old Mary Sue of a princess and the story was more Maid Marian in Robin Hood’s forest. The language of Galantier evolved. The history of their world and its internal narrative revealed itself to me. The structure of their magical system developed. Cultures within the story rebuilt themselves and characters told me who they were and who they thought they were. But a few things have been there since I used the first draft to write my way out of trauma and despair for my country: A small group of people who believe in an egalitarian nation can make it happen. They can bring a nation back from the brink. They can find hope despite despair, and keep working the problem even when the problem is a civil war.

Publishing this traditionally would always have been difficult. I’ve got this enormous story to tell, and my publishing cred is all academic. No traditional publisher with a brain will sign on for a six volume epic fantasy about a lawyer. Not from an established writer with a dedicated fan base. Much less an academic who still hasn’t broken 4,000 Twitter followers after 10 years. Oh, and the author doesn’t really want to publish in paper because that makes it a harder book to read.

But as more than a lot of fanfic has proved, we can do things differently. So let’s go push the limits of the technology and the art form of the novel and see where we go.

And now the credits. This book would not exist without my spouse, who shall remain nameless at Spouse’s request. Thank you for letting me stay up all night so many times, and for developing a love for Soylent when I couldn’t be arsed to care about food.

This book would also not exist without my favorite and best ever beta reader, Malcolm A. Schmitz. You can read his work at his linked Patreon page if you subscribe to him. Which you should do. He’s amazing.

Ready for more Rebellion backstory geekery? Follow me to

they fight for their dreams - and steal yours.

Real News For and By Workers

The Joys And Frustrations Of A Gearhart Knitter

How I learned to stop worrying and love the sock machine.

A crochet hook, some yarn and a little creativity. Dog hair optional.

Undermining the Patriarchy Every Chance I Get. And I Get a Lot of Chances (Copyright Preserved)

A blog about fat, feminism, politics, and God...not necessarily in that order.

Can You Vague That Up For Me?
CaptainAwkward.com

Don't need to be cool to be kind.

VANDALISM? CORRUPTION? HAVE NO WHERE ELSE TO TURN? NO STORY TOO BIG OR SMALL THE OSN WILL INVESTIGATE! Please email news tips to Hildelysiak@gmail.com